Ecuadorian chocolate producing companies were awarded in the “First International Contest of Chocolates made at origin”, an event organized in Paris by the Agency for the Valorisation of Agricultural Products, AVPA. 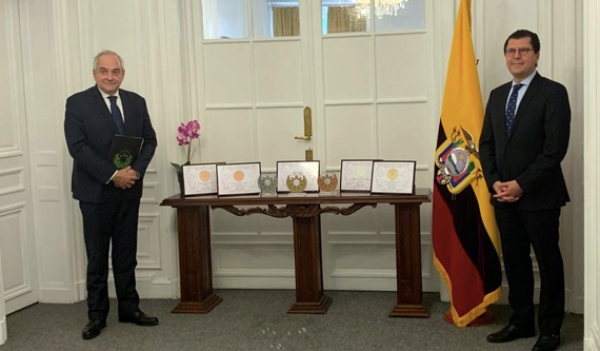 The Ecuadorian companies that were recognized are: Fresh Costa, which received the Winner Gourmet Diploma Award, for the Cardamom and salt chocolate bar, presented by its Kuná brand; Nativaromas, which, with its Nat Kaw brand, received the Gourmet Gold Winner and Gourmet Bronze Winner awards for its 80% and 76% RAW chocolate bars. Meanwhile, the company Andean Flavors received the Winning Bronze Gourmet Award for its Tavoro bar, presented under its Tavoro brand.

Upon receiving the awards, the Ecuadorian ambassador to France, Efraín Baus, stated that Ecuador is the cradle of cocoa, having verified, through scientific studies, that the presence of cocoa in the Ecuadorian Amazon dates back 5,500 years, which positions the country as the oldest place in America in terms of the origin and consumption of cocoa.

Baus highlighted that the geobiological wealth and particular conditions of the country allow the cultivation of unique and exceptional varieties, such as the “National Top”, valued throughout the world.

The Embassy of Ecuador in France and the Commercial Office of Ecuador received the diplomas awarded to the winning Ecuadorian companies, from the AVPA president for Latin America, Philippe Juglar, and the agency’s coordinator, Marcela Thimonier.

Galápagos Protected Area: To extend the reserve or not?