While the United States expedites the extradition of Enrique Portocarrero from Spain, in Ecuador the authorities trace his business ties and the financing of candidates in Esmeraldas. 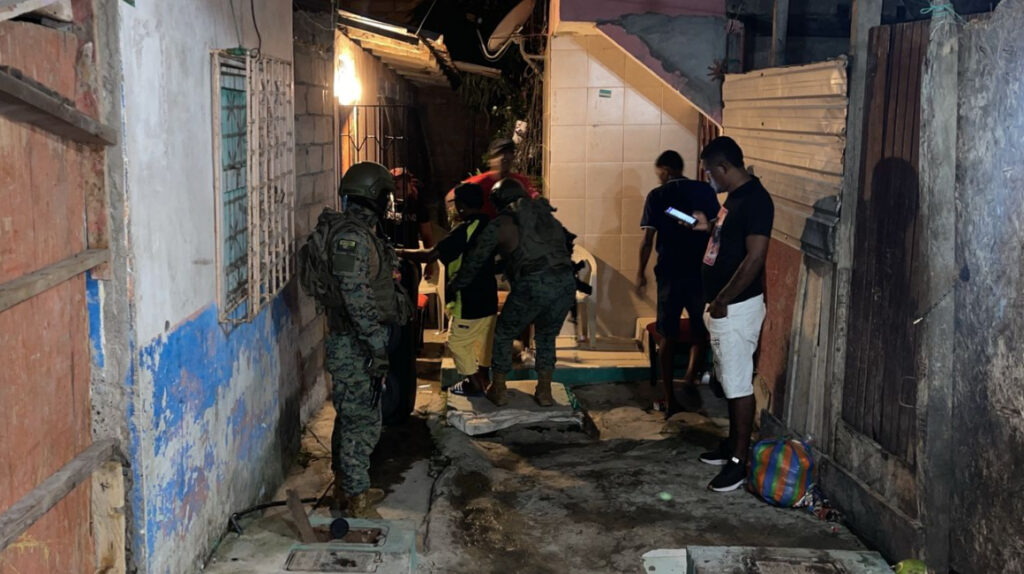 Armed Forces operations in the Codesa sector, in Esmeraldas, on September 7, 2022.

Enrique Portocarrero was arrested at the Barajas airport (Madrid), on November 22, 2022, by an international arrest warrant from Interpol.

The Ecuadorian is required by the Drug Control Administration Department (DEA) for the alleged crime of drug trafficking.

Spanish government sources confirmed to PRIMICIAS that, after the arrest, there is a period of 40 days to extradite the Ecuadorian to the United States.

In this case, the Spanish authorities estimate that the 49-year-old from Esmeralda will be extradited within the next 20 days.

Portocarrero, alias ‘Chugo Porto-Patrón’, is considered by the Ecuadorian authorities as an important logistics operator for the Sinaloa and Jalisco Nueva Generación cartels in the process of shipping cocaine from Esmeraldas and Manabí to the United States.

In those provinces he operated with the gangs of Los Gángsters and Los Choneros. In his record he has ten trials for murder, plagiarism and arms trafficking. He was even sentenced for his complicity in a murder, but he was acquitted and released in 2016.

His capture in Madrid was possible thanks to a triangulated investigation between the United States, Ecuador and Spain.

The testimony of a ‘mule’

The operation began in June 2022, when an Ecuadorian woman carrying 5 kilos of cocaine was arrested by anti-drug agents in Florida.

When questioned, the Ecuadorian confessed that she was hired as a “mule” by a criminal organization led by Portocarrero.

From then on, the DEA informed its intelligence counterparts in Ecuador that, together with the Police, they began to track the activities of alias ‘Chugo Porto-Patrón’.

This is how they confirmed that Portocarrero bought several companies since 2019, with which he obtained income of USD 7.1 million, but did not pay Income Tax.

Fell into the trap

That was the beginning of an international operation that had to overcome some pitfalls. Above all, the risk that Portocarrero would escape, since in Ecuador he is not facing any trial for the crimes for which he is accused, nor was he investigated for his connection with the Mexican cartels.

In addition, if he was captured in Ecuador, he could not have been extradited to the United States, due to the lack of a treaty between the two countries.

On September 3, Portocarrero applied for a tourist visa to travel to France but was denied.

After that, Portocarrero began the procedures to request a visa to Spain, justifying the travel for tourism and to go to Qatar to see the World Cup.

By then, intelligence agents were following in his footsteps and asked for the collaboration of Spain, which agreed to carry out the covert operation, granting him the visa.

“He fell into the trap, from when he took a plane in Quito, because the Spanish guard policemen were already waiting for him in Barajas to arrest him,” a Spanish government source told PRIMICIAS.

At the moment, one of the clues that the Ecuadorian authorities are verifying is the sale of a company that sells fish and shellfish, domiciled in Guayaquil, which Portocarrero completed in March 2021.

That day, the now detainee sold his shares to businessman César N., also a native of Esmeraldas.

According to an official of that company, who asked not to reveal his name for security reasons, the administrator of the Portocarrero firm, whom they never met, transferred the company to them as part of the payment of a debt he had with them for USD 80,000.

The buyers did not know Portocarrero’s background, said the official and said that they were not in the police records.

According to an intelligence report reviewed by PRIMICIAS, the brother of the company owner would be linked to a criminal group that operates in Atacames , Tonchigue parish, and also has connections with the Oliver Sinisterra Front, from Colombia and the Los Tiguerones gang.

The report says that they have alliances to carry out micro-trafficking and drug trafficking operations, especially from Tachina (Esmeraldas), a key area for these criminal activities.

“Portocarrero was financing the political campaigns for the next sectional elections in 2023, as he sought to locate actors in strategic places, which would allow him to continue with his illegal activities on a large scale,” the report highlights.

According to public records, until his arrest he also financially supported sectional authorities seeking re-election and other candidates from some parties, for the decentralized governments of various cantons of Esmeraldas, including Muisne and Atacames.

‘Baby boomers’ and generation X, the voters with less influence