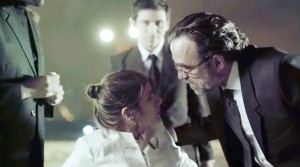 The Ecuadorean Entrepreneurial Committee (EEC for its Spanish acronym) adds to the claim raised by the television channels Ecuavisa and Teleamazonas to the government TV spot.

They consider that the spot “portrays in a distorted way the business sectors,” while the union explains that they comply with the law and with nonpolitical own activities.

The Committee notes that by showing “shady characters” this spot affects the honor of entrepreneurs.

“Stereotyping bankers and owners of private media as opposed villains to fundamental freedoms and the general interest of the public, the government defends, represents but to appeal to a simplistic argument that fosters improperly hatred,” they said through a statement.

The union asks: “sense and sanity to avoid this kind of controversy that contributes little to the true interests of the country, which will always be better served in an atmosphere of utmost respect, while it is true we can debate and dissent, it is done in line to not fall into the temptation of biased messages that undermine the principles developed in the communications law,” the statement concluded.

This, after the Council of Regulation and Development of Information and Communication (Cordicom for its Spanish acronym) indicated that the spot does not violate the Communications Act, and that undeniably the qualification of stigmatizing does not fit.