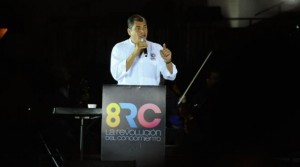 The Government indicated that education, knowledge, creativity and innovation are the issues it will be support during this 2015, which has been called the ‘Year of Innovation.’

Yesterday in the City of Knowledge, Yachay, the Innopolis fair began, in which government entities and independent researchers exposed ventures that could help to generate future income for the country.

The government plans to fund those ideas that are innovative with amounts from $ 10,000 to $ 50,000 or more, said Richard Espinosa, Coordinating Minister of Production.

It is expected that about 8,000 people, including students, businessmen and authorities, attend this meeting, which will last until Sunday.

As part of this event, the Government also celebrated eight years in power. President Rafael Correa said: “They argue that money is being wasted, that we are broken, that we want to perpetuate in power. You may know young people, that we have the urgent need to train those generations of Ecuadorians who will take the lead in running the country. To those generations of scientists and technicians that will make the good living possible.”