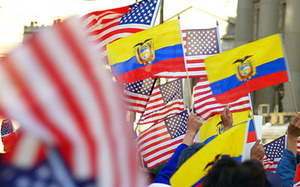 Ecuadorian migrants are among the less poor in USA

According to two reports of the University of New York City, presented last Wednesday, Hispanic immigrants from Colombia and Ecuador are the two groups that have experienced lower levels of poverty in the United States during the past 20 years.

This study was conducted to register that the two groups of migrants are in better economic situation than Puerto Ricans, Dominicans and Mexicans. Among the five nationalities registered, the Colombians registered the lowest poverty levels continuously since 1990 until 2011, as indicated by reports from the Latin American, Caribbean and Latino Center at the Graduate Center of the university.