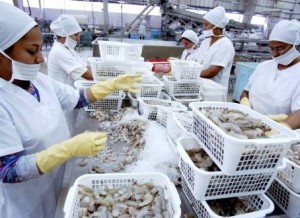 In the first quarter of 2014, Ecuadorian shrimp exports grew a 90.6 % compared to the same period last year, according to the European Central Bank (ECB). This makes it the fastest growing product in the list of 26 sales unrelated to oil.

The increased commercialization of shrimp has been a trend that continues. Since the sales of the first quarter of 2010 notice an increase of a 289.1 % recording a gain from $159.46 million dollars to $634.91 million dollars.

Yahira Piedrahita, Executive Director of the National Aquaculture Chamber, mentioned that in this quarter the rebound in exports was directed to Europe, Asia and the United States.

He also said that these countries have bought more because the supply of Asian competitors such as China and Vietnam declined due to animal diseases.

According to figures from the ECB, The United States, Vietnam, Italy, France and China are among those who mostly bought. This is confirmed by exporters as Jaime Aurea, from the Camaurea company , who notes that sales to China, Europe and USA rose a 30 %.