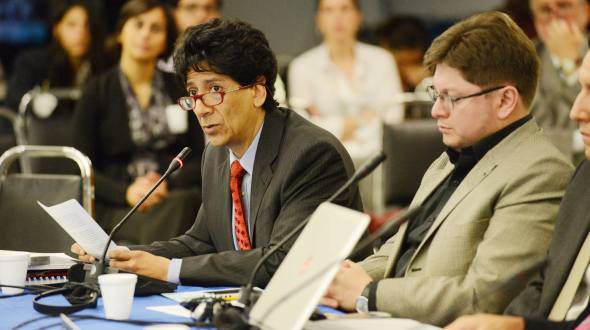 Representatives of the Ecuadorian civil society asked yesterday before the Inter-American Commission on Human Rights (IACHR) to visit Ecuador in order to verify the status of certain rights and intervene with the Government to ensure their exercise and fulfillment.

This request was made during the public hearings the body performs at its headquarters in Washington as part of the session 154, which started on Friday.

Before the plenary of the IACHR intervened delegates of Fundamedios, the Catholic University, the National Union of Journalists (UNP for its Spanish acronym) and Digital Users, who denounced the effects of the laws of Communication and Telecommunications, and raised concerns about “freedom of expression on the Internet,” said the Director of Fundamedios, César Ricaurte, adding that” attacks on freedom of expression increased 46% between 2013 and 2014,” with the application of the first law and “threats” to network users, “in recent months.”

Mauricio Alarcon, from Fundamedios, mentioned the cases of Crudo Ecuador, which closed its accounts on Facebook and Twitter after receiving alleged threats, in addition to the case of the member of the opposition Martha Roldós, who denounced the “hack” of her mail, and the teacher and leader Mery Zamora, who said to be “victim” of mounted images.

In addition, the cartoonist from EL UNIVERSO, Xavier Bonilla (Bonil), who was invited by the UNP, closed the debate asking for a working group to visit the country, the performance of a study on the situation of digital rights, and to “recommended to the State” taking measures to ensure free expression.