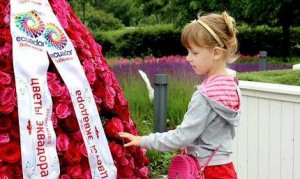 On Saturday June 27 the Moscow Flower Show exhibition was inaugurated, whose protagonists are banana and rose for Ecuador´s day, this event is organized by the Commercial Office of that country, in the Russian capital.

Ecuador´s day, leads the banana market in Russia, and has a share of 90 percent that expects to raise up to 92% this year, the director of Ecuador’s Commercial Office in Moscow Carlos Lema told EFE.

“Banana is the second fruit preferred by Russians after apple. It is a fruit well known by local consumers and is also the most accessible fruit,” said Lema in reference to a very important value for Russians in times of economic crisis the country faces today.

Fruit consumption in general has increased in Russia in recent years, mainly thanks to Latin American imports that allow access to this source of nutrients throughout the year, even during the frigid Russian winter.

KLM will fly to Ecuador with a Boeing 787-9 Dreamliner