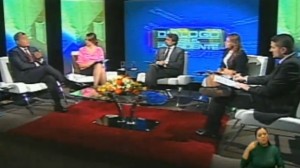 Last night the president of Ecuador, Rafael Correa, was interviewed by three foreign journalists, with whom he spoke about freedom of expression, the opposition and the draft laws of Inheritance and Capital Gains taxes.

On freedom of expression, he said everybody can say whatever they want, “but they have to take responsibility for what they say. If they offend, I have the right to reply. If a journalist is lying, he has to rectify, and that’s what bothers them,” he said to Siria Miranda, a Panamanian journalist.

Correa spoke about the opposition marches that took place during his absence from the country. “This year they have lashed out against us. We had 75% of acceptance. They managed to get us down a 5% back then, to get a 70%. At the time of the protests they were able to get us down to 55%. But we recovered. Finally now, according to polls, we have the 68% of acceptance.”

He also criticized once again the national strike called for August 13, the same that is organized by leaders of CONAIE, opponents of the regime.

He also mentioned that in the current political moment, with the dialogue, no consensus will be achieved, but ideas will be discussed. “Hopefully we achieve minimum consensus, for example, how to fight against inequality, against injustice, against exclusion. But there will continue being confrontation of ideas,” said Correa.