Ecuador’s role in the world map of cocaine grows

The new report from the United Nations Office on Drugs (Unodc) reveals that Ecuador is the third country in the world with the most cocaine seized. In addition, Guayaquil is one of the ports from which most drugs are ‘exported’. 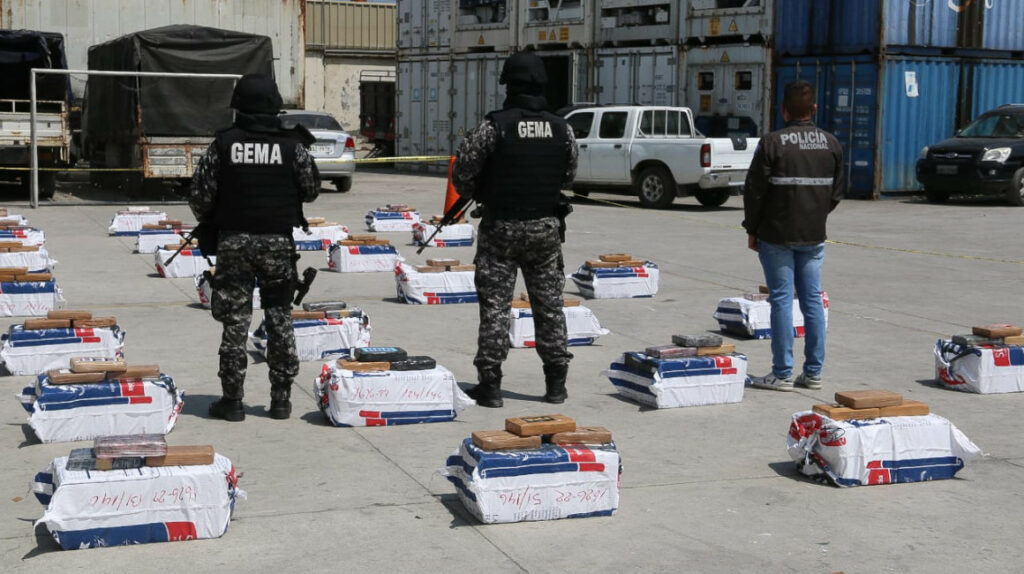 As every year, the United Nations Organization (UN) issues a report on the global behavior of the criminal economy of drugs.

The content of the report, the first of the post-pandemic era, is based on official data submitted by member states to Unodc , through an official questionnaire.

It is divided into five parts, with the fourth brochure referring to the illegal cocaine market , containing at least 20 direct mentions of Ecuador.

According to the report, Ecuador was previously a transit country for cocaine, mainly produced in Colombia, but now the country’s role has grown to become a distribution and export center for the drug.

Cocaine leaves the country by boat, semi-submersible ships and in containers from the ports, and destined for the United States, Europe and Africa.

Cocaine trafficking has continued to increase since 2020 despite the Covid-19 pandemic. The global quantities of cocaine seized increased 4.5%, to a new record of 1,424 tons .

The amounts of cocaine paste and base seized grew by 16%, and cocaine hydrochloride seized another 4%. Only seizures of crack cocaine and other unspecified types show less growth.

In general, estimates of the global quantities of cocaine manufactured and seized show a strong correlation. This suggests that cocaine interdiction has kept pace with increased supply and trafficking .

In addition, global cocaine seizures show a clear upward trend in the last two decades, especially in the period 2015 to 2020.

The total amount seized in South America is now five times higher than in North America, in contrast to the period 1999 to 2001 when the relationship was reversed.

According to data compiled by Unodc, in 2020 the three countries with the most cocaine seizures were Colombia, the United States and Ecuador . Of the almost 1,500 tons seized, 6.5% was seized in Ecuadorian territory .

Most of the cocaine trafficking in the period 2016 to 2020 occurred through already known routes. These depart from Colombia, along the Pacific coast , to Central America and Mexico (often by boat or semi-submersible craft), for traffic to the United States .

From the Andean region, shipments leave for Western and Central Europe by ship, often in containers. These go directly over the Atlantic to European ports.

In 2020, the main departure country for cocaine shipments worldwide, as reported by States to UNODC, was Colombia, followed by Brazil.

Countries outside the Americas most frequently mentioned Brazil as the country of departure for cocaine, followed by Colombia, Ecuador, Peru, and Bolivia .

While the countries of the region most indicated as exit zones for cocaine shipments destined for Europe in 2020 were Brazil, Colombia and Ecuador .

According to the UN report, drug seizures suggest a growing cocaine trade at sea .

The quantities of cocaine seized associated with maritime trafficking increased from 84% in 2015 to 89% in 2021.

Among the most important departure points from the region are the Pacific seaports of Buenaventura, in Colombia; and that of Guayaquil, in Ecuador .

Also included are the Atlantic seaports of Cartagena, in Colombia; and the Port of Santos in the State of Sao Paulo, Brazil.

According to seizure data, the main seaports used for the importation of cocaine into Europe were Antwerp, Belgium; and Rotterdam, in the Netherlands, in addition to several maritime terminals in Spain.

Another route that has grown from South America is Africa . According to UNODC, the most important country of departure is Brazil, which represents 70% of seizures between 2015 and 2021. The next most relevant country is Ecuador (14%) , followed by Colombia (11%).