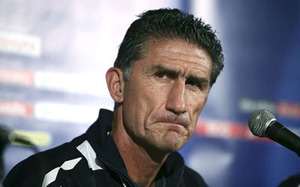 The coach of Liga Deportiva Universitaria de Quito revealed that he will not carry be the technical director of the soccer team for the 2014 season, announced Jaime Jacome, the sports manager of the club.

“Yesterday Bauza confirmed to the Football Committee that he will not continue to act as coach of the club, but as a fan and part of our institution wants to remain connected to Liga,” revealed Jacome. Bauza, is from Argentina, has a daughter born in Ecuador and has said he would settle in the country.

Bauza won with Liga de Quito the Ecuadorian championship 2007 and 2010, and on the international level in the 2008 Copa Libertadores and Recopa Sudamericana in 2010, but the irregular League campaign in the tournament Ecuador 2013 forced the coach to step side when the year ends.

The management team announced  seeks that their replacement be a winner, with ambition and bets on young people.