Egypt Protests against the Government 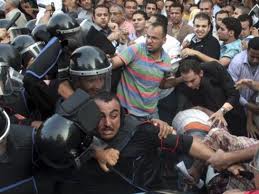 Today, January 25th is the “day of Egyptian wrath “, name that Egyptian activists have created for the revolution that is being lived on the streets of the country against the current president Hosni Mubarak, who has led Egypt since 1981.

The protest is considered one of the biggest protests that have existed against Mubarak regime. The activists organized themselves through social networks sites such as Twitter and Facebook; however, during the afternoon, the government has temporarily blocked Twitter. The activists have asked the protestants not to surrender and to keep in secret where the demonstrations will occur, until the last minute in order to prevent the lock of the police, as happened this morning, when the uniformed closed the hottest spots of the city: the Tahrir Square, official buildings, streets around the parliament, the Abdeen Palace, and the Cairo University.

The cops have used water cannons and tear gas to disperse the crowd that is singing “Down with Hosni Mubarak”, throwing stones, and objects.

Egypt has lived with an emergency law for 30 years, which allows the government to do arbitrary detention. The law has been used to silence any voice against the government. In the North African country demonstrations without previous approval are banned. Opposition groups have complained that they have been denied the opportunity to do so and any protesters could be arrested.
Yesterday the Interior Minister Habib el Adli, issued orders to “arrest any person who expresses illegal views.”