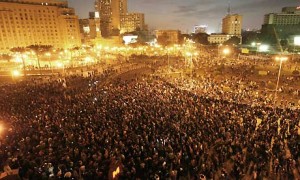 Clashes between police and demonstrators in Egypt have taken greater intensity in the last hours and, at this moment it have already become the largest protest demonstration that have being lived in Arab countries after the revolution in Tunisia.

During the day the main building of the National Democratic Party (NDP) was entirely burned so it was the government palace, while the National Museum in Cairo has been protected by a human chain to prevent the looting.

The protests, initiated by the young middle class, has made all the people of Egypt to take the streets in order to topple the prime minister. Several policemen took off their uniforms to support the protests and the military forces, who were sent to govern the curfew, have allowed the protesters to climb on the tanks and were also greeted with applauses.

Businessmen and personalities are leaving from Egypt in private jets; Hosni Mubarak’s family has already arrived to London. In addition, several airlines have already suspended their flights to Egypt.

Meanwhile Egypt protests has also affected the rest of the world: The Egyptian Embassy in Caracas and New York has already been taken by Protestants. U.S. has not intervened; but Hillary Clinton has asked to remain calm and stop violence. The relations of Egypt and the United States are in risk because the bullets and tear gas that is being used to attack the Egyptians are from the American country.

The President, Hosni Mubarak talked to the nation few minutes ago through the media, his words were: “I want to assure that I am working for the people to establish freedom of expression, as long as you respect the law… We can reach an agreement through dialogue … We can overcome the situation … I will resign my government today, and tomorrow I will give to my administration clear objectives.” The Egyptian president, announced that he has asked the government to resign and said he will appoint a new Executive.

Creativity and Table Games at USM