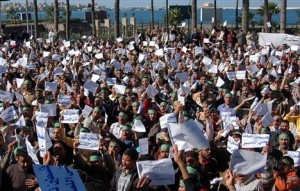 Thousands of Egyptians took the streets again, despite government bans, which assured that violent incidents would not be allowed today. About 500 protesters have been arrested, but the number of protestants has increased as the number of cities that have joined the revolution -Cairo, Suez, and Alexandria- to overthrow President Hosni Mubarak, who has kept the country in a dictatorship for 30 years.

Police are using tear gas and batons to disperse the crowd -as they did yesterday in the capital- today, the Egyptian Prime Minister, Ahmed Nazif, has come out to defend the police actions that yesterday left four dead people, and said that the government will allow freedom of expression by “lawful means,” while the White House has asked to the Egyptian Government to respect the “universal freedom right of assembly and expression.”

Social networks have also become a protests scene, through them people is still being called for new demonstrations, despite the blockade that Facebook and Twitter had yesterday. Egyptians were able to overcome the blockade and continue using them as means of communication.