Eight requests from employers and affiliates in the “defense of IESS” 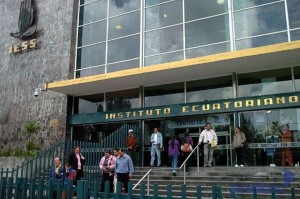 With a packed auditorium, representatives of employers and affiliates reached a consensus today March 21, 2016 in eight orders in defense of the Ecuadorian Social Security Institute (IESS).

The meeting took place in the auditorium of the National Union of Journalists (UNP). There, the Chamber of Commerce of Quito (CCQ) organized a forum to discuss the situation of the IESS, following the adoption of the draft Organic Law for the Promotion of Youth Work, Exceptional Regulation of the Workday, Severance Pay and Unemployment Insurance, days ago approved by the Assembly and now in the hands of the Head of State for assent, before it enters into force.

The meeting was attended by Eva Garcia, a guest economist; Omar Serrano, a former member of the Biess; Manuel Vivanco, director of the CCQ; and Felipe Pezo, representative of the employers before the IESS.

The agreements reached point, first, to the refund of 40% of the compulsory contribution of the State for the financing of social security benefits. The fixed percentage was eliminated by the Labor Justice Act, adopted in April last year.