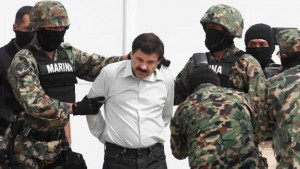 Andean Airlines (Lincandisa), the advisory company Managers Ecuador (Gestorum) and the importing company Comercializadora Empresarial (Business Team) are three companies that Mexican Joaquin “El Chapo” Guzman set up in Ecuador to launder money, and whose offices were located in Quito, but according to the US Treasury Department, they do not work there.

The companies are part of 288 companies the leader of the Sinaloa cartel has been used since 2007 for illegal activities in 15 countries in the region. In Ecuador, Guzman’s right hand was the Colombian Jorge Milton Cifuentes Villa, who was arrested on November 8, 2012 in Venezuela and extradited to the United States.

Investigators point out that he structured a corporate curtain in Quito and used the false name of Elkin de Jesus Lopez to operate.

According to Colombian investigators, Cifuentes was posing as a successful businessman who made investments in Panama, Mexico and Ecuador. In this way he opened the three companies operating in the country, which were created between April and October 2008.

The US Treasury Department said that the three firms are related to the Federal Panamanian company Capital Group, created in June 2007 with a capital of USD 20 million, the same that are shareholders among them and work in the same office building located in the north of Quito. On the ground floor of this property labels with the names of the three companies ‘El Chapo’ opened in the capital do not appear. In May 2011, the Superintendency of Companies declared the dissolution of Lincandisa because it did not submit a statement of its economic activity and its “business address is unknown.”

The Attorney General confirmed it opened an investigation on the three companies in Ecuador. The process is at the preliminary inquiry.

Instructional for TBC use allows collections with payrolls