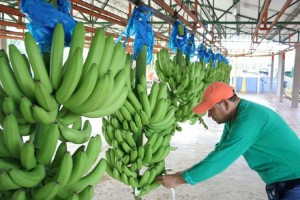 Projections on possible impacts on crops are treated in banana forum.

The projections about the possible affectation of banana crops by the effects of El Niño, which would manifest between November and December this year, concerns the banana sector, which foresees a decline in production of between 15% and 30%, the latter could mean the loss of about 100 million boxes of fruit.

This was estimated yesterday by Eduardo Ledesma, executive director of the Association of Banana Exporters of Ecuador (AEBE), before the opening of the XII International Forum of Bananas 2015, in Guayaquil, that will last until Thursday.

In this context, according to Ledesma, the issue between banana growers and government officials will be treated. “If the phenomenon is strong and dams are mishandled 30% of production could be lost, something that would be disastrous,” he said.

Despite the projection, Ledesma said that the private and public sectors are better prepared than in 1998, when El Niño affected 20% of banana production.

Furthermore, Ledesma considered that in case there is no affectation by El Niño, exports this year could exceed 305 million boxes and set a record compared to 2014 when 298 million boxes were exported.

Meanwhile, at the forum it was scheduled the delivery of special awards to outstanding institutions and banana producers.

Moreover, one of the main innovations of the meeting is the Banana Museum, where the portraits of 16 outstanding businessmen of the sector the past century are exhibited, including Luis Noboa Naranjo and Enrique Ponce Luque.