El Telégrafo newspaper would present a better year, after losses 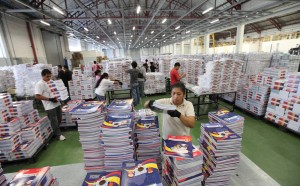 “The company is in the process of transformation to a public enterprise,” is stated in the website of El Telégrafo newspaper. To transform the company into a public one, a consultant was hired for advice, for which $ 32,000 were paid, which is showed in the 2013 accountability of National Graphics (Editogran).

Editogran highlighted in its report the acquisition of new equipment, like the new press, which has allowed them to increase their operational capacity.