Emilio Palacio and César Pérez  gave their testimonies this Monday, June 14, 2021, before the  Inter-American Court of Human Rights (I / A Court HR) , in the case of El Universo against the Ecuadorian State. 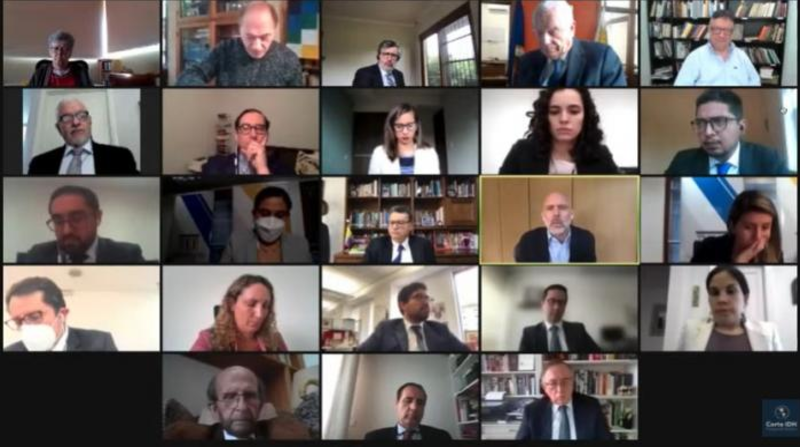 That there is  justice  and jurisprudence is felt   through a sentence in favor of the free exercise of  freedom of expression  in  Ecuador  , Palacio, former opinion director of the Guayaquil newspaper, and Pérez, current general manager and director of the medium, sued in the first of two days of  collection of testimonies  and criteria of specialists. The Inter-American Court reviews what happened with the  judicial process  that former President  Rafael Correa brought  against El Universo for an opinion column, which ended with sentences against Palacio and directors Carlos, César and Nicolás Pérez.

Correa, then president of Ecuador, denounced them for the publication of the  article ‘No a las mentiras’  (February 6, 2011), which addressed the police revolt of September 30.

Palacio, in his speech, affirmed that he suffered  physical and psychological damage  during this period in which he found himself in a “forced exile” in  Miami, United States , a city to which he moved 11 years ago.

Palacio claimed that his case constituted a  persecution . He said that the ex-president had a  political problem , as he had to demonstrate that a  Communication Law was necessary  after a popular consultation in the country.

“A climate of fear was established in  Ecuador , there were ten murders of critics of the  Government . Then I realized what he was playing with: that I leave  Ecuador  or that they kill me. That’s why I left, ”Palacio said.

He also said that he tried to do  journalism , but did not succeed because he did not get funding due to a widespread fear in  Ecuador  on the part of advertisers.

After Palacio, Pérez intervened. He explained that in the  history of the newspaper  there have never been processes against the  medium  or its managers. “There had been  civil or criminal lawsuits  against columnists that were always abandoned along the way, but never before had a manager been sued or criminally charged for an opinion piece by a third person.”

He added that, in the citizen links every Saturday, the  ex-president  sustained “insults and insults” against them. “He told us  corrupt , that we are useless, miserable, hypocritical, cynical, horrible chubby, he told one of our journalists, the perverse told El Universo (…) my children  witnessed  all these  attacks , this humiliation from the can”.

Pérez recalled that the  Ecuadorian justice  ruled in first and second instance in favor of  Correa  and established a sentence of three years in prison for the accused and the payment of USD 40 million as  compensation  for injuries. In 2012, and after the cassation, the  ex-president  announced the remission of the sentence. According to Palacio, forgiveness was useless.

The manager of  El Universo  added that during this period his family has experienced a “constant level of stress, fear and anxiety” due to the  uncertainty .

“Hopefully that sentence  can be erased  so that no one even dares to cite it as  jurisprudence  (…) I hope that the Court does justice, the  justice  that I did not find in my country, and that it be a sentence that deepens and feels jurisprudence not only in  Ecuador , but at the regional level, in favor of the  free exercise  of  freedom of expression ”.

Pérez added that  Correa  was a censor who used the justice operators in his favor. “We did not have  impartial judges , we had submitted judges who were later promoted.” The latter in relation to judge  Juan Paredes  who went from being temporary to permanent after the first instance.

At the beginning of the day, Amparo Esparza, on behalf of the  Ecuadorian Attorney General’s Office , indicated that the  State  has recognized that the plaintiffs’ rights  were violated  . However, Palacio replied that nothing has changed in the country and that the documents that appear in the  international process  do not speak of reparation, that it is not  only  financial compensation .

After the  hearing  on Monday, June 14, the day is expected to resume on Tuesday, June 15 with the statement of Toby Daniel Mendel, a specialist who will issue a criterion on  freedom of expression . He was proposed by the  Inter-American Commission on Human Rights . The decision of the  Inter-American Court will  not be known at the end of the session. This  resolution will  probably take about two months.