Elders Had Dinner at 9 de Octubre 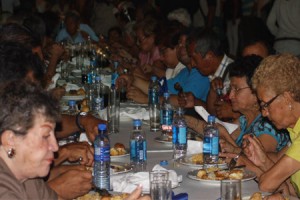 9 de Octubre Avenue became pedestrian last night. 360 tables covered with white tablecloths and chairs were placed in the center of the famous avenue, giant screens, a stage, and people walking by the Av. 9 de Octubre drew the Pacific Pearl out from the routine.

It was 19:00 and the chorus of people began to be heard “Guayaquil with Nebot”, the mayor was arriving. From Avenue Malecón to the Parque Centenario he went greeting through the tables to the 3600 seniors who would receive the “Solidarity Dinner” organized by the municipality with the support and the administration from the staff of the Hilton Colón Hotel.

At the end of his route Jaime Nebot went up to the platform where he prayed the Our Father and said: “You have given Guayaquil the best of your life in quality and quantity. Guayaquil counts for you and you count to Guayaquil. God bless you and have a great 2011.” Quickly he got down of stage and located in one of the tables to have dinner with the elderly.

Meanwhile, the traffic chaos in the nearby streets generated complaints. People spent hours in the traffic jam caused by the event, drivers complained because they were not warned about the road closures.