The supporters of the presidential candidacy of the Guayaquil politician and businessman Álvaro Noboa will demand with protests and vigils that the National Electoral Council (CNE) register him and allow him to participate in the 2021 general elections. 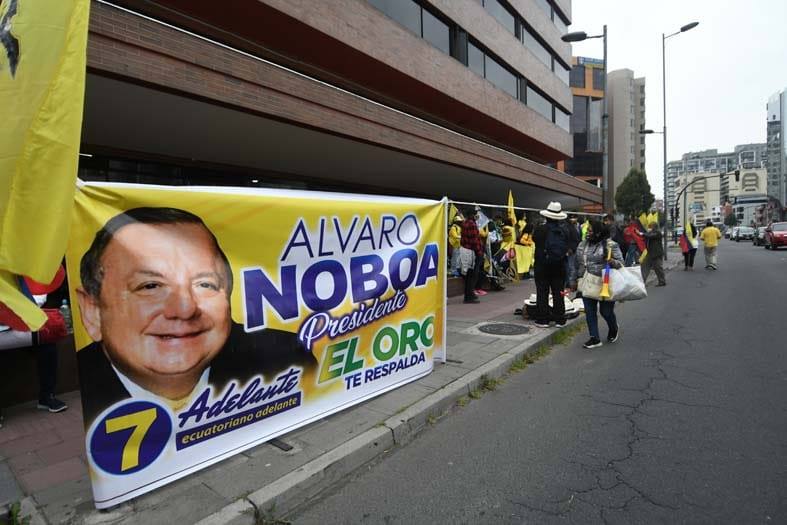 On the morning of this Monday, November 16, dozens of Noboa sympathizers gathered outside the Council in Quito, to demand that their registration and that of Gino Cornejo, as candidates for the Presidency and Vice Presidency of the Republic, be given way. respectively, by the Social Justice movement .

At the event, it was reported that they threw eggs into the agency’s building and warned that they will remain in “vigil” until they are registered. One of the slogans was “Out (Diana) Atamaint, out!” .

Gino Cornego attended this demonstration and assured that the “party is preventing the registration” of the binomial.

“The CNE is preventing compliance with the judgment of the Contentious Electoral Tribunal (TCE) . We have to continue in the fight, and we are here so that the institutions are respected. We cannot continue like this, ”he said.

Sylka Sánchez , related to Noboa and former director of the defunct Adelante Ecuatoriano Adelante (PAEA) political party, indicated that they will not “move” until the TCE ruling is complied with. “I come to denounce that votes are being manipulated within the National Assembly, in exchange for the candidacy of Noboa, which has 60% support,” he denounced, referring to the political trial that is being processed in Parliament against the Minister of Government , María Paula Romo.

Sánchez added that “the candidacy is legally registered with the CNE and they cannot change it after the sentence is executed and when the CNE opened the registration system.”

He also denied that his militancy had thrown eggs at the Council and accused “infiltrators.”

In context, at the beginning of November the TCE issued a judgment in which the resolution of the CNE of September 16 was nullified, with which the Social Justice movement was extinguished, for not having complied with the number of signatures to obtain legal status. legal, according to an audit by the State Comptroller’s Office .

In addition, it was ordered that administrative measures be given for the political organization to carry out its internal democracy processes for the selection of candidates for the elections.

However, on November 11, the directors decided to reconsider one of their resolutions (of November 5) in which the deadlines for the registration of candidates were enabled, since during this phase.

The argument is that between August 23 and October 7, Social Justice did participate by entering the documentation of its candidates for the dignities of national and provincial assembly members.

He even tried to enter the documentation of his candidates for the presidential binomial. The political organization reported that they were Carlos Cassanello and Marien Segura Reascos; and even Noboa himself.

However, they did not conclude the procedure, as the Council’s computer system was closed at 6:00 p.m. on October 7. (I)