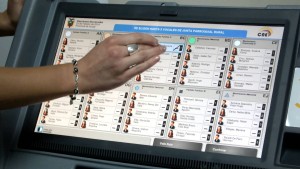 It is expected that six provinces implement the electronic vote modality for the 2017 elections.

For the elections of 2017 six provinces are expected to implement the electronic vote, this is the goal of the National Electoral Council. Magdala Villacis, vice president of the CNE, said they hope that at least six million voters participate through the automation of the voting as well as the vote counting process.

Azuay, Santo Domingo de los Tsáchilas and Pichincha conducted the electoral process through electronic vote in 2014. It´s being planned which will be the other provinces involved in this modality. According to the accountability report of the CNE, 936.133 people were registered for e-voting but only 724,910 participated.

Police accused of regicide is pardoned by President Correa