Emapag responds to Rafael Correa for mutual task in the estuary 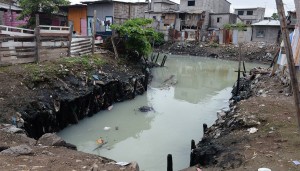 Interagua and Emapag refuted the statements of President Rafael Correa, on the cleaning of the Salado estuary of Guayaquil.

“Why haven´t we been able to clean the Salado estuary? Because there are not enough Interagua connections, wastewaters are still released into the Salado estuary and even industrial waste water, which is intolerable,” said Correa, who acknowledged that the estuary would not be fully decontaminated by 2017, as it was expected.

The two companies (one in charge of service and the other regulatory), explained there are sectors that have not been incorporated into the formal sewage system due to eviction notices issued in 2012 by the central government for about 1,500 surrounding lands to the estuary banks, for the construction of the Salado Ecological Park.

This, according to Interagua and Emapag, ‘prevents’ that lands of the Trinitaria Island, the West Suburb, Pilot Plan, Cisne I and II are incorporated into the network and currently release their wastes directly into the estuary.

Drugs that would cost $ 15.4 million were seized in Galapagos

Ecuador cuts growth forecast of its economy in 2016, to less than 1%