Emelec after the title in Portoviejo 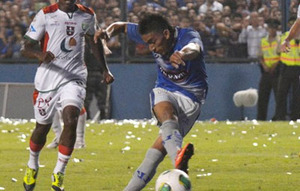 Today the penultimate round of the Ecuadorian Soccer Championship and Club Sport Emelec could be champion if they tie or win to Manta in Portoviejo, although if Independiente does not defeat Liga de Loja, is  very much likely that the blue team will be the champions if the they do not lose.

Today’s date will also define the ranked international tournaments and teams that go down to the B series.

Manta faces Emelec in Portoviejo, the match will be played at 13:30 on Stadium Reales Tamarindo. The first match of the day will be to Liga de Quito which receives Deportivo Cuenca at 11:30 on Casa Blanca and is bound to win in order to stay on track to qualify for an international tournament. El Cuenca also needs to score to avoid relegation.

El Nacional would receives at 13:30 the Macara in Atahualpa of Quito and the military need to win to enter the South American Cup classification while their opponent does not play anything because it makes two dates down to the series B. Later, Liga de Loja receives at its stadium, the team Reina del Cisne, Independiente at 14:45 . The locals fight to avoid relegation, while visitors need to win in order to be vice champions.

At 16:00 at the stadium 7 de Octubre, Deportivo Quito will face Deportivo Quevedo and both teams need to score points, the locals to try to save themselves from relegation and the chullas to try to become vice-champions. In closing date 21, Barcelona receives at the Monumental stadium at 16:45 the Universidad Catolica team and both need the points to keep aspiring to classify an international tournament.