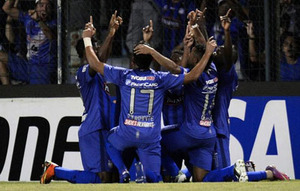 Emelec is a champion without winning

All other teams played for Emelec, except Emelec. With this thought, many fans of the more than 22,000 fans who attended last night match at the Capwell Stadium, showed their  unease for not winning against Liga de Loja and being crowned champion after their escorts lose and Universidad Catolica lost against Independiente del Valle with a tie.

However, the crown is secured. The blue team have six points more than Independiente, the only team that could reach them if the next two dates are won with 11 bgoals and the blue team lose their final two matchs. Something very difficult to accomplish, considering that Emelec is the most consistent team and only lost 2 games in the entire second stage of the 2013 championship.

Yesterday, during the first hour, Deportivo Quevedo surprised Universidad Catolica in Quito and won 3-2, which confirms their recovery and has won five of its last seven games, which clings to stay in the A series.

Then, in the same game field of Atahualpa, Independiente drew 1-1 with Deportivo Quito in a tough game in which there were several expelled. The result hurt both teams, as they needed the three points, for Independiente to continue to aspire to be first and fight for the crown against Emelec, and Quito to ensure their qualification for 2014 Libertadores Cup, although they have two dates to reach that objective.

In Casa Blanca, Liga de Quito loose again as local against El Nacional with a score of 0-1 and he reduced the chances of reaching an international tournament, while the military, despite their victory, they have no chance of winning anything this year.

The one who can reach international tournaments is Barcelona, ​​although they missed the chance to win last night in Cuenca and only a ended the match with a scoreless draw, but if the results are given and win their last two games they could become vice champions.

In the remaining match date, Manta lost to the relegated Macara in Ambato, and stood in the relegation zone, despite missing two games and only one point to escape elimination.

Catolica and Independiente played for Emelec