Emelec receives Deportivo Quito in a special date for their escorts 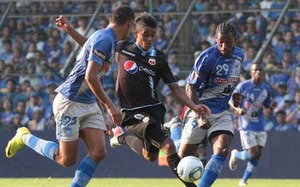 Emelec will play against Deportivo Quito

Club Sport Emelec, leader of the second stage with 34 points, followed by Catolica and Independiente, both with 31 points, will play their matches in the 18 date in order to win and get first place. In the case of Emelec, they can be champions without playing Final, or go to a definition match with the blue team that won the first stage, in the case of his escorts.

The electric club seeks to stay on top of the tournament on Sunday when they host Deportivo Quito, at 16:30, in theCapwell Stadium. The other games are: Macara with Independiente in Ambato; Universidad Catolica against Liga de Loja, in Quito; Manta faces Deportivo Cuenca in Cuenca; and Liga de Quito will face Deportivo Quevedo, in Quito; finally El Nacional will play against Barcelona in Quito.

The ticket prices for the match Emelec-Quito are general and Tribune San Martin, $ 6, the tribune of General Gomez and the box Pio Montufar, $ 10; General box and additional suite, $ 30.

On the other hand, in alliance with Emelec, yesterday the Pacific Bank presented the award “Bench Bank,” which will be given to the best player of each match to be played in their stadium. The first prize went to Maximum Banguera, the Barcelona goalkeeper for his performance in the Classic. The player who wins the trophy more times in a season will receive a $ 5,000 bonus.

The full date of the championship will be played smoothly, after the Association of Arbitrators of Ecuador, decided to whistle normally after a notice to do so in the of the aggression rejection of the club Pilahuin Tio, of Imbabura, to the members of the referees during the match that ended with a tie between Delfin and Manta 2-2. The Ecuadorian Soccer Federation (FEF) excluded the Pilahuin Tio of the tournament’s second category.