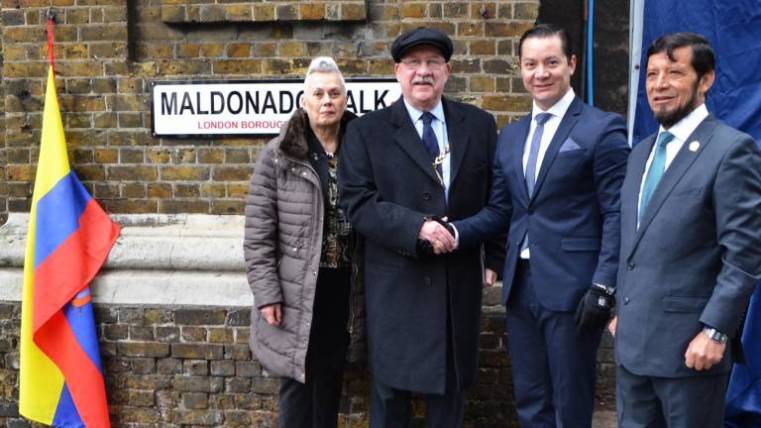 With an event in which Ecuadorians living in England participated, delegates from Ecuador, English authorities and citizens made their way to Pedro Vicente Maldonado Street, in honor of the scientist from Riobambeño.

The tune of the National Anthem of Ecuador, folk dances and sandwiches based on typical products of the country, such as shrimp, potatoes and green, brightened the atmosphere of the inauguration of the road.

Juan Pablo Cruz, councilor of Riobamba and who was in charge of the project, was excited by the achievement, since in that city “there is no way that has the title of a Latin American person,” he told EXTRA. He started the project in 2014 and he did it because he believes he has a citizen commitment to the country, in addition to being a follower of Maldonado’s work in England when he was part of the French Geodetic Mission and in other academic areas.

At first, the idea was to repatriate the remains of the researcher, who died in 1748. But after an investigation, they discovered that during World War II the catatombs where he had been buried would have been destroyed. “His bones would have been joined with those of other deceased in a common grave,” Cruz said.

That is why he undertook the plan to give recognition to the scholar through a street, although the procedures for this to be achieved usually take between 12 to 15 years; He, on the other hand, managed to get four of the London authorities to accept the petition.

After the work done by Maldonado in London was verified and he socialized with the neighbors of the sector, since before the avenue named ‘Eagle Yard’, it was agreed to renew it. The event had the coverage of local media of the European city and raised the interest of the citizens of that city, since the street is located a few blocks from the Big Ben clock and the headquarters of the main institutions, Cruz concluded. (I)