End of Israeli occupation is demanded by Palestinian Authority president 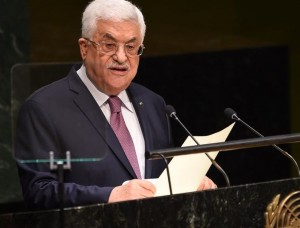 The president of the Palestinian Authority Mahmoud Abbas.

The president of the Palestinian Authority Mahmoud Abbas demanded on the United Nations the end of the Israeli occupation and denounced its “war of genocide” in Gaza.

“It’s time to end the occupation” of Palestinian territories, Abbas said at the plenary meeting of world leaders in New York, noting that years of negotiations between the parties have not reached a peace agreement.

Abbas began his speech denouncing that Israel chose 2014 as a year to “make a new war of genocide against the Palestinian people” in the Gaza Strip, “a series of absolute war crimes in the eyes and ears of the whole world.”

“We will not forget, we will not forgive and we will not allow war criminals escape punishment,” the Palestinian leader said in reference to the conflict that took place between July and August of this year and left about 2,000 Palestinians dead and 70 dead of the Israeli side.

he Palestinians have threatened to resort to international justice for legal action against Israel, though Abbas made ​​no direct reference to this issue.

Guitarist of AC / DC has dementia