Those who knew him remember him as a gentle man, a dreamer, with little speech but frank conversation. Of generous knowledge, always ready to meet young artists. The art of Luis Enrique Tábara Zerna was in constant avant-garde, his legs – his ‘Paws’ – became his other signature, in his other way of depicting the human being on canvas. 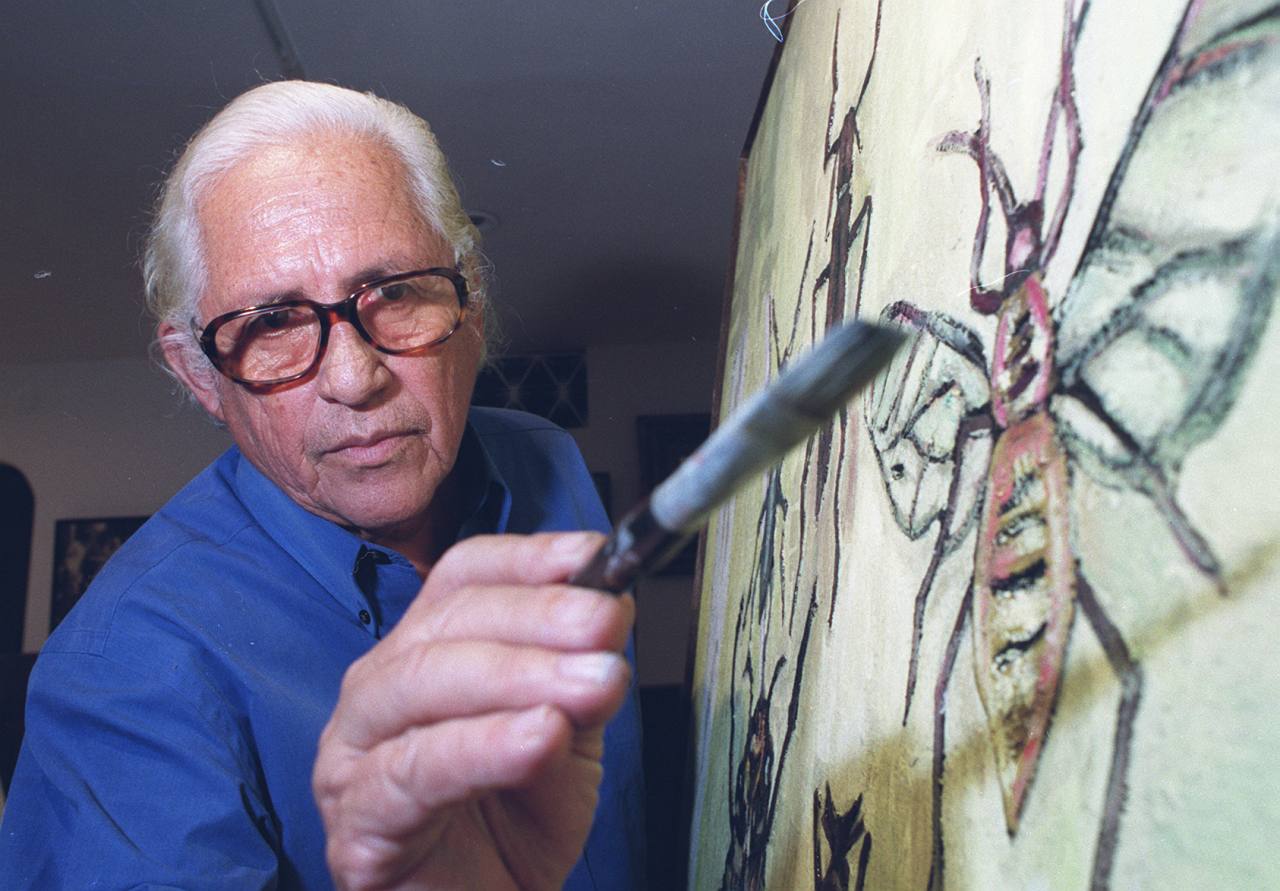 Master Tábara, as everyone refers to him, left yesterday, Monday, January 25, at the age of 90. His death occurred in Cuatro Mangas, an area that is 10 kilometers from Quevedo, in Los Ríos. A place where he retired from the sound of the city and surrendered to the silence of the countryside to do what he loved the most: paint and sculpt.

Tábara leaves with his own feet that took him to Europe, but his work remains, a benchmark in Latin America.

“He was a painter until the last day of his life,” says Eduardo Tábara , one of his sons, who explains that it was a natural death: a problem with kidney failure caused a heart attack.

“He filled us with beautiful values, leaves good children, good parents. We are calm and obviously heartbroken. They were 72 years of artistic career, giving everything for the culture of his country ” , Eduardo adds on behalf of his ten siblings: Javier, Juan David, Oswaldo, Enrique, Pilar, Gustavo, Ricardo, Fabricio, Gabriel and Carla.

He was born in the Barrio del Astillero de Guayaquil. His beginnings in art were marked by social realism, portraying what his eyes perceived in the sordid corners of the city, such as coal children from the Garay neighborhood, sex workers from Machala Street, scenes from living rooms, suburban characters and more.

But from 1953 on, he turned towards modern art. He traveled to Spain in 1955, at the age of 25, managing to carry out 15 exhibitions in various cities on the European continent. In fact, in October 2020 he had planned an exhibition in Catalonia , which could not be carried out due to the pandemic, says his son.

In 1961 the French writer André Breton invited him to be part of the Spanish delegation for the Tribute to Surrealism, together with other renowned artists such as Salvador Dalí, Joan Miró and Eugenio Granell.

In 1964 he returned to Ecuador with the pre-Columbian theme. And in 1968 he created his series Pata pata. “I experimented with colors that I had never encountered before, I took notes that were transformed into pictures of legs, then legs with shoes and pants with shoes,” he told this newspaper in 2010.

Landscapes and insects were also models for his paintings; he was something of a master of experimentation. “I am inspired by some images or rhythms, especially rhythms … architectural rhythms, I can make myself known with my feet but being inspired by pre-Columbian things, that’s my message and I don’t want anything else …” , he told the curator Rodolfo Kronfle in an interview for this newspaper.

What other artists say about him …

“Tábara was an iconic artist in terms of modernity (…), he was also important because he evolved according to what he wanted; First he painted figurative because that is how he learned to paint, then he derived it to the ancestry and returned to his legs, then he went to the trees that had legs and began this iconic way of putting his symbols in each of his evolutions. He was, above all, a great observer of composition… ”, says Mariella García , executive director of the MAAC.

For García to speak of Tábara is to refer to an important person in her life, the teacher who motivated her to exhibit and who was her most faithful critic for years. “Really, if that hadn’t happened, I wouldn’t have dedicated myself to painting,” he confesses.

“Tábara told me that painting was a kitchen, that what was done quickly, the wind took away… That is what Maac is, a kitchen that comes from the Anthropological Museum where Tábara is made visible from government authorities and begins in a room author ”, the anthropologist tells about the MAAC reserve that guards a total of 75 works by Tábara.

“An era of great painters, of great masters, who made their own aesthetic cuisine, is closing,” he says.

“A great teacher who had the virtue of shining in two centuries, in the 20th century and in the 21st century, due to the versatility of his talent,” says Hernán Zúñiga , visual artist.

He remembers him as a demanding artist -something surely inherited from his teacher Hans Michaelson, at the School of Fine Arts, where he studied encouraged by his sister and mother. “He never stopped, he was always innovating, that is how he directed his talent towards abstractionism, for example, there was also a constructivism that very soon led him to a kind of Latin American pop …” , he says.

“In such a way that we have to face the loss of an aesthetic paradigm of the visual arts of Guayaquil and that had an international resonance,” he continues and highlights that Ecuador remains indebted to him “with an intolerable indifference.”

For her part, María José Félix , director of Culture of the Municipality of Guayaquil, argues that it means the loss of the most prolific painter in the Ecuadorian plastic arts.

“The significance of his work, in its various stages, reflects the evolution of a genius in constant search, which ended up being widely recognized as one of the greatest exponents of Ecuadorian art of all times,” he says.

“Guayaquil loses one of its favorite sons, and it is our commitment in the Municipality’s Directorate of Culture to help preserve his legacy, which will last for future generations, who will continue to appreciate his immortal talent in his works , ” he adds.

In 2017 he received a decoration for cultural merit by the plenary session of the National Assembly.

Enrique Tábara held his first exhibition in 1952 when he was just 22 years old. Ten years later, in 1960, he won the II International Prize for Abstract Painting, in Switzerland. In 1967 he won the First Prize at the July Hall. In 1988 he received the National Eugenio Espejo Award.

In 2017, the plenary session of the National Assembly awarded him a decoration for cultural merit. His works are in some museums in Ecuador, Spain and the world.

The Enrique Tábara Foundation, together with several entities, chose November as the month of Tábara, in which they developed various activities in homage to the Guayaquil teacher.

In 2015, the filmmaker David Grijalva and his son released a documentary about the life and work of the plastic artist entitled Enrique Tábara, ephemeral memory . This was part of his series Memory of the arts of the port that showed a dialectical perspective of the evolution of the contemporary arts of the Litoral region.

“I trust that one day the museum will be built, that if I don’t do it, my children will. That would be a gift that I would give to the country, through the foundation (Enrique Tábara Foundation) ” , he confidently expressed to EL UNIVERSO in 2016 , referring to the Museum of Pre-Columbian Art that he wanted to found.

More than twenty years ago that idea had become his pending account, in the dream that he wanted to see crystallized before “leaving where we all must leave at the end of life.”

Even, I already imagined how its structure was going to be: “very curious, very rare and a great tourist attraction”.

His plan was to build the museum on the hectare of land he had in Cuatro Mangas; with 5,000 archaeological pieces from different ancestral cultures and 100 paintings by different national and foreign painters.

Will the desire that teacher Tábara kept alive come true? “We are in that, for years we have worked on it. Let’s hope that the help at some point will come through the Enrique Tábara Foundation, which is the container of his patrimony, ” says his son Eduardo Tábara. (I)