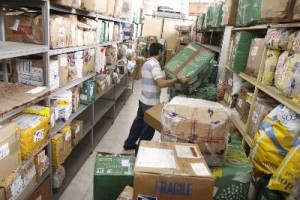 The sending by curier will have the first adjustments mechanisms exemption for imports of clothing and footwear. This  , is part of the change of the Production Code that directly affect the private sector entrepreneurs .

They question constantly the sending goods by couriers and Internet shopping . Ensure that these mechanisms encourage illegal trading and therefore should be regulated .

The complaint was the attention of the ministers of Production and Industries , Richard Espinosa and Ramiro Gonzalez. Both opened the debate on Wednesday in a meeting to discuss alternatives. The most important change is the 4×4 (imports up to 4 kilos or $ 400 tax-free ) system.

Lilia Villavicencio , president of the National Chamber of Footwear, coincides with this alternative. Said that reducing the limit of importation will prevent purchases abroad. She says that smuggling had a significant impact in 2013. According to figures from the House in Ecuador last year 32 million pairs of shoes were manufactured . Less than a million produced in 2012. Fact striking because until 2012 sales grew by over 50 %.

Moreover, textile entrepreneurs believe that control mailing is only part of the change. It is necessary , they say, increase border control .