Equipment to refloat and tow the ship, arrives to Galapagos

Last Thursday the first set of equipment that will be used to refloat and tow the Galapaface I ship, arrived to San Cristobal Island on airway.

The ship stranded last May 9 near Punta Carola, in San Cristobal, which generated a ministerial agreement of Environmental Emergency for the authorities in the cantonal and provincial Emergency Operations Committee to carry out the landing out of 19 ​​thousand gallons of diesel, which was the greatest environmental threat.

According to the director of the Galapagos National Park, in three or four weeks and at a cost of about six million dollars, the ship will be out of the nature reserve.

Equipment includes an electric generator that would allow the operation of the ship’s crane for the discharge of the cargo which is still inside. Steel plates and other materials also arrived in order to repair hull breakdowns. 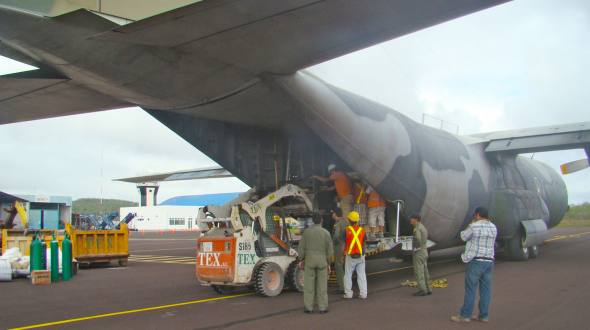 The equipment arrived yesterday on a C130 aircraft of the FAE to the Puerto Baquerizo Moreno airport in the San Cristobal island.