BREAKING NEWS
Fashion with social impact is created in workshops in the country
Release of fuel imports will affect air tickets
The 30-S evidenced the manipulation of justice in the time of Correísmo
Ministerial agreement would enable the Ecuadorian fishing fleet to fish for giant squid
Ecuador has granted 44 051 humanitarian visas to Venezuelan citizens
Prosecutor’s Office denounces a death threat against the judge who is prosecuting Jacobo Bucaram
What are the crimes that Jacobo Bucaram is linked to?
Richard Carapaz arrived in 22nd place and was the best Latin American in the World Cycling Championship; Jualian Alaphilippe was proclaimed champion
Epidemiological week ended with a considerable decrease in infections
Shrimp and banana shipments to China decline 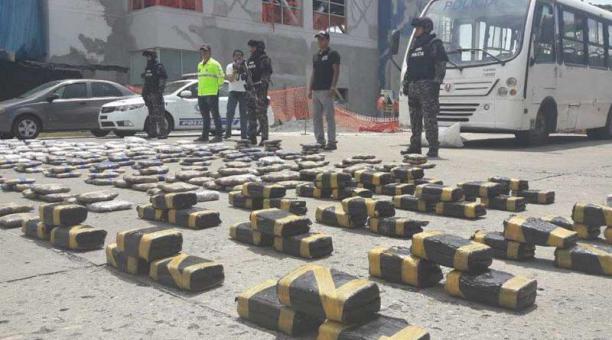 The criminal organization had a “solid structure”. 21 people were in charge of intermediating, buying, transporting and marketing drugs in sectors of Guayas such as the Malvinas, Esteros, Guasmo and others.

The alkaloid came from Esmeraldas and trucks were used to transport it. The investigations say that the cargoes were guarded during the whole route. A second sergeant of the Navy was in charge of this task. The uniformed was arrested on Saturday, April 14, 2018, after he returned from Peru, where he was on a committee with the president, Lenin Moreno, as he was part of his security escort.

This is detailed in a police report that was issued the same day of the arrest. This document also indicates that the organization to which the sailor belonged was engaged in internal drug trafficking on a ‘large scale’.

General Pedro Mosquera, head of the Presidential Protection Service, confirmed that the uniformed was part of the security of President Moreno and that he was arrested for the alleged crime of drug trafficking.

The Police and the Prosecutor’s Office initiated investigations against this organization six months ago. During that time they managed to identify that they moved important loads. For example, on April 12, they had 45 kilos of alkaloids in their possession.

That drug was found in 25 buildings. The agents named that operative as ‘Impacto 135’. Among the evidence gathered were also three firearms, 19 cell phones and cash. Currently, the Prosecutor’s Office investigates whether the drug came from Colombia and to which international networks it was purchased.

Another point that is asked is whether the sailor also committed other crimes or if he gave confidential information to the mafias. One of the tasks that he had within the Presidency was to accompany the Head of State in trips or in commissions. Precisely, that’s why he traveled to Lima-Peru.

He was part of the group of uniformed officers that would protect the President during the Summit of the Americas. Other information that was revealed around the uniformed defendant was that he also collaborated in a network dedicated to home theft. Until the corresponding investigations are carried out, the Presidential Protection Service suspended the compensation of the second sergeant. (I)