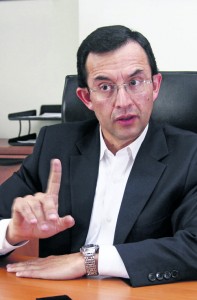 The Superintendent of Communication, Carlos Ochoa, spoke at the Occasional Commission of the Assembly, which processes the amendments on the change to Section 384 of the Constitution, which seeks to establish the communication as a public service.

For him, it is “a breakthrough in the legal system.” Because the Organic Law of Communication (LOC for its Spanish acronym) by itself does not ensure that the rights can be demanded and exercised, he said.

But Ochoa in his speech, said that as it is a public service, it will clearly establish the provisions of Sections 22 (right to receive information of truthful public importance ), 71 (common responsibilities) and 106 (equitable distribution of frequencies) of the law.

However, for Legislator Luis Fernando Torres (Change-PSC party), this will not improve the content of the law, nor the judgment of the Constitutional Court. He considers that it would “unnecessary, it would not change or contribute with anything.”