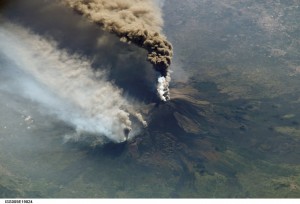 The Sicilian volcano Etna has entered in state of eruption this Thursday morning, after sprouting Lava Rivers through a crater on the southeast slope. Experts say that after the explosion an ash cloud could appear an affect the Valle del Bove.

The National Institute of Geophysics and Volcanology of Italy, informed that the volcano activity began on Wednesday, and it intensified by night. Meanwhile, local authorities closed the airport of Fontanarossa, Catania, cancelling international and national flights. This preventive measure was based on the possibility of a dust cloud.

At the moment, the activity of  Etna has ceased. However, volcanologists believe that a new eruption could happen. The air traffic has been reopened and the situation seems under control since Etna is one of the few active volcanoes in Europe. The eruptions of 2007 and 2008 damaged several inhabited areas.