EU: Ecuador must improve the legal framework and legal certainty for investments

The European Union (EU) pointed out that it is a challenge to capitalize on the achievements of the trade agreement to stimulate investment, because those that Ecuador has attracted are less than those of neighboring countries. He praised the goal that the Government of Guillermo Lasso has to attract more investment. But he stressed: “we have to work more to improve the legal framework and legal certainty that are the conditions to stimulate more foreign investment,” said Charles-Michel Geurts, EU ambassador to Ecuador at the presentation of the achievements of the trade agreement in five years, where he also spoke about the challenges, and this is one of them. 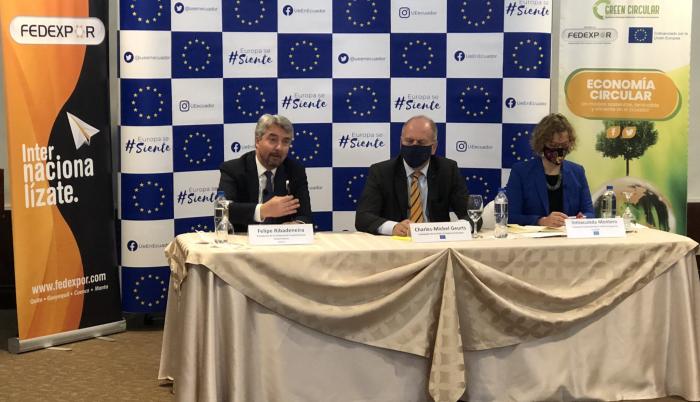 Presentation of the achievements of the trade agreement between the EU and Ecuador.

The EU became the largest investor in Ecuador (2017, 2018 and 2019 with 22%, 33%, and 38% respectively of total FDI). But in 2020 it fell in that ranking, the EU was the second largest investor in the country with 24% after Canada. The areas of greatest interest today to invest in are the exploitation of mines, commerce, agriculture and fishing, construction, services to companies, transportation, among others.

He added that the trade agreement established a legal framework with clear and predictable rules. Ecuador is progressively adapting its regulations to international standards and eliminating barriers to trade such as numerous technical regulations that hinder trade. He emphasized that a fundamental point for the EU is to achieve a correct application of this legal framework to attract new national and international investments.

In general, it was said that bilateral trade relations have been strengthened since the Trade Agreement entered into force on January 1, 2017. The Agreement has proven to be a win-win pact for both parties. But Geurts stressed that more work must be done to eliminate the points that still exist and that are a barrier to trade.

Taking the same period (January-November 2017, January-November 2021) as a reference, Ecuador’s exports to the EU have grown 18%, while imports from the European Union to Ecuador fell -3%. These figures are explained by the strong contraction of the Ecuadorian economy (-7.8%) in 2020.

The agreement achieved a decrease in prices of imported products thanks to the progressive tariff reduction. As of 2022, 1,326 products that enter Ecuador from the EU will have a zero tariff, for example vegetables, dairy products, meat, plastics, wool, tractors, velocipedes, instruments and toys, as this Journal published in a previous article. Perhaps something more illustrative is the elimination of tariffs for trucks over 9.3 tons and 20 tons. Light vehicles with a cylinder capacity of 1,500 cc, which previously paid a 40% tax, will now pay 10%.

With 0.72%, January presented the highest monthly inflation of the last 12 years