EU highlights results of CAN reengineering 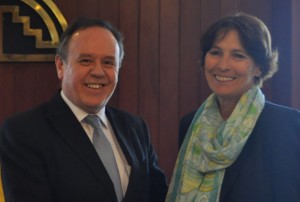 The representative of the European Union (EU) in Lima, Peru, Irene Horejs, yesterday highlighted the reengineering of the Andean Community of Nations (CAN), of which she said it will consolidate the integration in basic areas.

“The Reengineering has been the decision of the four member countries that have agreed to strengthen integration in basic areas and make it work. We like very much what has been achieved this year”, she said.

Herejs met with the Secretary General of the Andean Community, Pablo Guzman, with whom she exchanged various points of views on results of the reengineering process, including the definition of areas of priority action and the new structure of the General Secretariat.

At the meeting the issue of cooperation and exchange of experiences between the EU and the CAN was also discussed.

“We entered into a new area of cooperation, not just projects to run, but rather to organize a permanent dialogue and exchange of experiences”, she said.