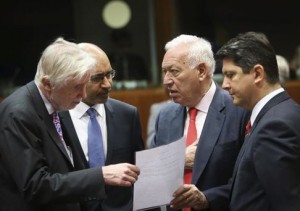 The member countries of the European Union adopted new sanctions this Monday, including, for the first time, companies linked to the conflict in Ukraine and Russia expecting any of these give way to a dialogue.

The new sanctions added another 13 names to the list of those sanctioned by the EU, which now increases to 61 people, mostly Russians and Ukrainians in Crimea, who cannot travel to Europe or move their assets.

The new sanctioned belong to the Administration and the Russian Army, who in addition are self-proclaimed leaders of the eastern parts of Ukraine.

The EU will also block any kind of business relationship with two firms in the region, seized after the change of status of Crimea.

“There will not be a lasting and stable solution without Russia. This requires to restore a collaboration atmosphere, but only if Russia agrees for a change of attitude,” said the Spanish Foreign Minister Jose Manuel Garcia-Margallo, after the meeting with his European counterparts.