In his office he keeps his uniform, a saber and the badges he obtained as a police officer. Andrés Solano now dresses as a civilian, since he was separated from that institution in 2012, after being prosecuted for the events of 30-S. 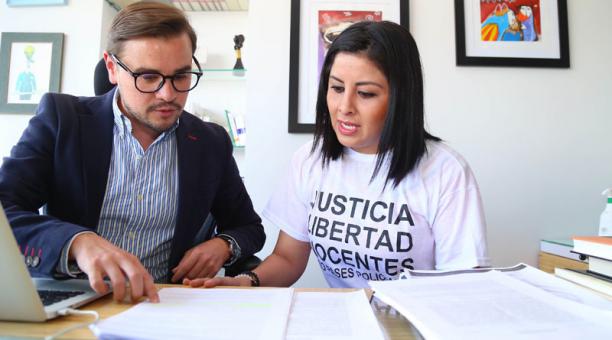 The lawyer Eduardo León and the wife of Daniel Gutiérrez analyzed the case.

He was charged with the crime of rebellion and sentenced to one year in jail. The penalty was ratified in the National Court in 2014. But he did not comply, as the cause prescribed. Next to him there were seven more processed.

Solano says that before the Court ruled, people close to the national magistrates cited them in a private office.

There they were told that if they canceled USD 60,000, the judges would declare them innocent. “They called the magistrates in our presence and they set the fees they should charge us. They told us we could cancel by cash, check or by transfer. ”

Solano says he did not pay, because he had no money. “My colleagues who handed over the money have proof of deposits, but for fear of reprisals they have not reported.”

Solano’s case was documented in a 249-page report prepared by the Bureau for Truth and Justice, which investigated the persecution and ‘irregularities’ in 247 legal proceedings during the Rafael Correa administration.

There are mentioned alleged payments for bribes to judges in exchange for not being accused or sentenced to jail. “In the 30-S there was the case of an officer who had to sell his house and pay USD 62,000 to avoid being sentenced,” said another police officer.

During the evaluation of the judges and judges of the National Court, the Technical Committee took this document into account to write a report that they delivered to the Judicial Council, which also established that there was a “disproportionate increase” in the patrimony of seven high magistrates.

Two of them denied that accusation on Friday, November 8, 2019 and assured that their assets were obtained legally.

These two magistrates are part of the list of 24 judicial authorities that failed the evaluation. On Friday of this week, the Judiciary is scheduled to announce the list of judges that will be removed.

The report also details the case of Daniel Gutiérrez, who is currently serving a sentence for organized crime.

When their trial reached the National Court, the magistrates increased their initial sentence from five to nine years and four months.

According to his lawyer Eduardo León, the judges violated due process, as the Comprehensive Criminal Code (art. 5 numeral 7) prohibits increasing the penalties and worsening the legal situation of a person when in a last resort appeal, which is stirred up in the National Court, this is the only litigant.

In this case this was applied. That is why the lawyer and the wife of the defendant filed a protective action in the Constitutional Court.

The report of the Bureau described as “poor” the performance of the National Court, because it considers that “it did not fulfill its role of correcting sentences with violations of due process, but violated the right to defense.” Another case that was analyzed in the Table of Truth and Justice is that of Taski.

This company that provides printing services filed a contentious administrative lawsuit against a public entity that terminated the contract for the printing of forms and portfolios for the 2010 population census.

According to investigations, when this case reached the High Court, in 2013, the process did not move or present progress “without explanation”. Nor were errands performed. After five years the case was just resolved. The report says that there was “negligence on the part of the judges for allowing so many years to pass without a pronouncement.”

In another fact of judicial delay, labeled Terrorism, it is explained that in an appeal (which is resolved in the National Court) he spent three years without being treated. This appeal was closed only after Correa left power and the defendant was declared innocent.

In the case of Solano, with the ruling issued he had to leave the Police and for two years he worked as a taxi driver and as a waiter in a restaurant. He now owns a private security company.