Evo Morales takes his third term in front of Bolivia 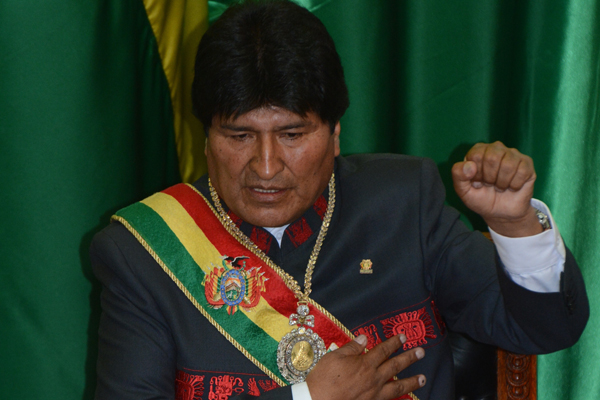 Bolivia’s President Evo Morales took office this Thursday for a third consecutive term, until 2020, in a ceremony at the Plurinational Legislative Assembly before thousands of indigenous, peasant and popular movements.

The inauguration ceremony began with a parade of Bolivian parliamentarians towards the Murillo square in the city of La Paz and the subsequent entry of international delegations at the seat of legislative power, Telesur reported.

Morales swore, with the left fist, “to the Bolivian people and equality of all human beings” to perform the high office to which he was reelected last October with 61% of the vote.

Minutes before swear to office, Morales received five indigenous and union leaders loyal to his government in the Quemado Palace of La Paz and symbolically handed them the band and presidential medal to take back the legislature.

Morales, 55, will serve his third term in government (2015-2020), and will become the president who has governed the destiny of this country for the longest time: 14 years.