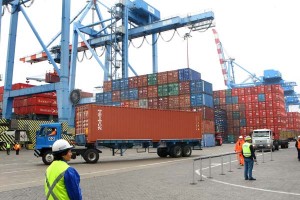 Since January 5 of this year when the exchange safeguard (surcharge applied to products purchased from Colombia and Peru of 21% and 7%, in that order) became effective, until February 28, the National Customs Service of Ecuador raised $ 24’267.319,73. This was reported by the entity, at a time when the measure is to be dismantled and replaced by a new one called global safeguard.

Felipe Ribadeneira, chief executive of Fedexpor, said that on March 3 businessmen and government representatives met to discuss global safeguards to be applied in the coming weeks in a phased way to certain imported products.

Ribadeneira said that the entrepreneurs already made four observations about the subject, at the last meeting of Carondelet, held last Monday. In this meeting they requested that the measure complies the parameters of the World Trade Organization (WTO); to exclude raw materials, capital goods, which serve for production; to be temporary and be in effect only while the external sector is corrected.

Besides respecting established import quotas to prevent product shortages and to not affect products in transit or which are about to leave the customs.