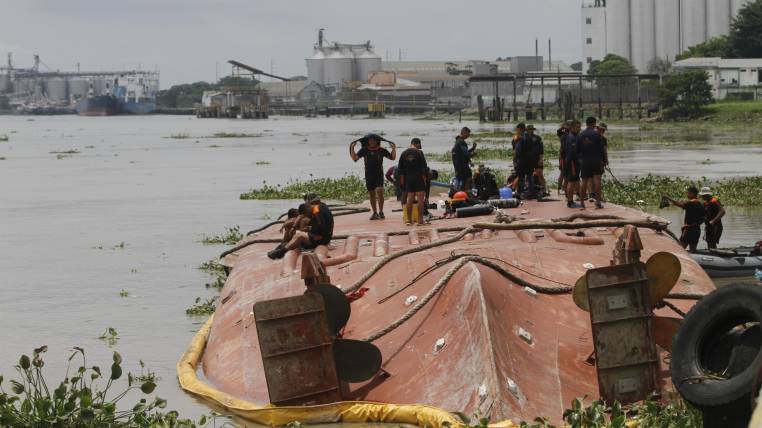 The absence of safety and emergency protocols within the barge, stricter regulations and an informal loading process are some of the reasons why, according to experts consulted by this newspaper, the Orca 1 sank quickly the morning of last Sunday in the quay of Caraguay.

Before the accident, the vessel performed loading maneuvers of three CA-20 asphalt tanks, which, according to one of its crew members, was excessive for its size. “My colleagues say that before they have taken five, but it is a very big burden. Only two already felt the imbalance, “he said without revealing his name.

“It is painful that here the maritime transport does not have a very strict regulation related to the safety of the boats, documentation and inspections, because the problem was definitely a bad stowage.

They made the embarkation of the first two tankers and sent them aft. The third entered and without having its own securing systems the barge leaked slightly and one of the tanks slid to the other side. That caused the instability, “explains Byron Machuca, naval engineer for 20 years.

Jaime Pozo, who is a diver and ex-integrant of the Navy, agrees with Machuca and says that there were procedures that were not carried out. “What I could see is that the crew members throw themselves into the water without a vest. There is a maneuver to abandon the ship. You are going to tell me that everything was very fast, but they are situations that are foreseen. All implements must be at hand “.

In addition, it emphasizes the importance of investigating if those who carried out the process have the knowledge to handle the stony material and if the type of vessel was the one that had to transport the tar tanks.

“Not matching the load well can cause an accident. It is necessary to see if the dock is capable of accommodating the ship, perhaps in the port it would have been possible to embark more easily and with adequate machinery. I believe that there was no control necessary for that vessel to transfer that type of material, “he says.

“For me it is very rare that a boat that is on the dock of a bell turn and is submerged without bad weather or waves. It is the owner’s obligation to have people ready to carry out this type of maneuvers”, says Fernando Donoso, former chief of the Navy.

According to his perception, there was lack of skill on the part of the crew, so the authorities should investigate if the barge had the permits to operate and inquire about the process of obtaining the certifications.

However, Juan Liger, captain of the Port of Guayaquil, indicates that the vessel passed the tests before his last trip and was fit to carry the material. “The vessel had already transported the same type of material to Galápagos and the Undersecretary of Ports, in a past meeting, indicated that the vessel meets all the standards.”

He also explained that the new controls would be carried out after the loading of the tanks, so only the investigations will determine whether or not he was able to navigate.

The rescue work resumed normally during the morning of yesterday. Later, Major Jorge Zambrano, who was in charge of the search operations, mentioned that the “lechuguines” that surrounded the area complicated the work, since the divers ran the risk of being trapped.

The Puerto captain, Juan Liger, mentioned to EXPRESO that they are waiting for a specialized technician to determine which is the most appropriate way to make the turn of the boat. The expenses of the operation will be borne by the insurance that currently has the barge.

On the site, personnel of the Superintendence of the Oil Terminal of El Salitral (Suinsal) controlled the contamination by means of the placement of insulating barriers and absorbent cloths. These works, as reported, will continue until the refueling maneuvers of the vessel are completed. (I)

The new appraisals, available from this February 19