Exploitation of mining fields will begin in 2018 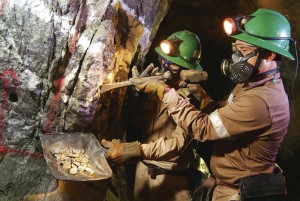 According to the Minister of Mines, Javier Cordoba, Ecuador will begin the exploitation of mining camps in 2018.

“The major mining projects, I mean Fruta del Norte (and) Mirador will enter into operation (phase) from 2018,” said Javier Cordoba, Minister of Mines, during an interview with the ECTV state channel, on the exploitation of two mining fields with reserves of gold, silver and copper, which will take place in early 2018.

Both deposits are located in the province of Zamora Chinchipe, bordering with Peru. Despite resistance from indigenous and environmental groups, the country began mining activities on a large scale in 2012.

The Fruta del Norte field is concessioned to the Canadian firm Fortress Minerals Corp., of the Lundin group, while Mirador to the Chinese company EcuaCorriente ECSA), both fields have reserves of 7 million ounces of gold and 9 silver, and 2,3 tons of copper respectively.

Ecuador will stand up to falling oil prices