Last Wednesday, the brother of President Rafael Correa, Fabricio Correa, visited his friend, former councilmen of Latacunga by MPD Xavier Cajilema, who remains in prison along with activists Paul Jacome and Edwin Lasluisa, accused of public home invasion during the police uprising of September 30, 2010.

After the visit, Fabricio Correa said the sentence met by the the “three of Cotopaxi” is unfair. “Today more than ever injustice is being seen because a similar case, Mery Zamora’s, has just been filed by appeal.” “Justice is worse than ever because there is no independence of the functions of the state.”

The politician also commented on the recent proposal of indefinite reelection for elected officials, saying it is a “mistake.” “When you strongly lose the election and in the installation of the councils you do not even get a deputy mayor of Alianza PAIS, it means that the troop says: ‘Oh, we are going down, so we should fix this because it could end for us’ .” 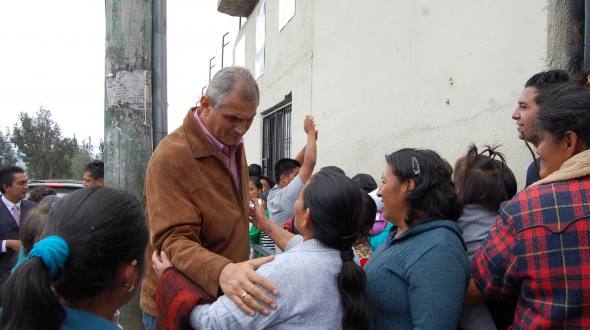 Fabricio Correa visited towns next to the Cotopaxi Prison.