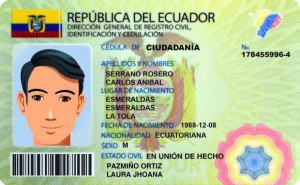 The couples of different sexual orientation could register their facto unions since today in the agencies of the Civil Registry in three cities: Quito, Guayaquil and Cuenca.

This reform is supported by certain representatives of LGBTI groups, but is also criticized by others.

Diane Rodriguez, President of the Association Silhouette X, said that the decision was made possible by the “political will” of President Rafael Correa.

However, the collective of Equal Rights Ya! notes that this is a “stopgap measure” and it has no legal weight according to them.

Pamela Troy, Coordinator of the group, argues that the “additional data” is a “nonexistent figure” and that the law, according to her, only conceives four civilians states: single, married, divorced and widowed. She notes that the norms should be reformed.