Farmers affected by the rising cost of inputs 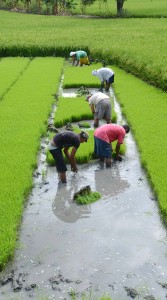 Farmers take advantage of the rains to grow corn, rice and other products, but say that the wages and inputs values increase the production cost. This affects them because it reduces the profit margin of the small producer .

Washington Orellana said that after taking the $ 200 he has to pay for the rent of one hectare, agrochemicals and other items, he obtained less than expected.

“There was just something left to pay debts,” said Orellana, who feels that the time devoted to the crop is not equiivalent to what he earns at the end of the harvest. He explains that most of what he gets is used to cover the production costs .

José Tomalá, President of the Agricultural Center of Daule explains that now, to produce an hectare of rice, depending on the area, it costs between $ 1 300 and $ 1 500, while last year the cost was around $ 1 200.

“There are some fungicides that have raised its prices. If last year one was at $ 25, now you get it at $ 30,”says Tomalá

Similarly, Carlos Murillo, corn producer and Fenamaíz leader, estimates that the production cost has suffered an increase of 15% this year in his sector.

Because of this situation, there are producers that have reduced their staff or have assumed that work themselves with their families.

Eusebio Alejandro, President of the Association of Farmworkers of Santa Elena, says that because of the higher costs there are small farmers that have reduced their cultivated areas.