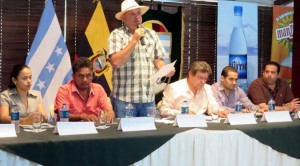 The Farmer’s Association of the Coast and Galapagos warned yesterday about the decline of cattle in the country and said that this could cause a “severe shortage of meat in the markets, which will be accentuated in the months of December, January and next February.”

Lorens Olsen, President of the Union, said that product prices will continue to rise in markets driven by a gradual reduction in the number of cattle.

The leader said that this reduction would be due to the declining in the interest of many farmers to continue in the activity, and the change of pastures by planting crops that produce more per hectare.

The Union said that the lack of interest of farmers to remain in the activity is also due to the difficulty in accessing credits, particularly from public banks.

“In Balzar, credit applications for livestock development have fallen by 50%,” Olsen said.