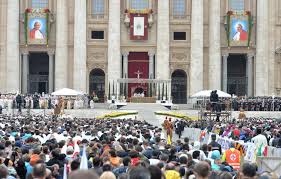 The Francisco Pope proclaimed this Sunday (Ecuador 03:15) the sanctity of the Juan XXIII and Juan Pablo II Popes, in a massive ceremony in St. Peter’s square, in latin language. There were shouts and applause in St. Peter’s square, as well as elsewhere in Rome, where tens of thousands of pilgrims gathered before giant screens from which followed the ceremony.

The prefect of the Congregation for the causes of Saints, Cardinal Angelo Amato, presented to Francisco “three requests” of canonicalization for both parents, first with “great force”, then with “greater force” and, finally, with ” very great force”.
What the Pope agreed and urged the two potatoes to be registered in the books of the Saints.

The Emeritus Pope Benedicto XVI, who renounced the throne of Peter in 2013, attended the ceremony along with the dad Francisco, 150 Cardinals and thousand bishops. For the first time in the ancient history of the church a canonization was concelebrated by two living popes.

The relics of the two new saints, a vial of blood from Juan Pablo II and a piece of skin from Juan XXIII extracted during its exhumation in 2000 were placed beside the altar. A tide of flags, mostly Polish, colored the vast square, where many young people showed enthusiasm despite the fact that they spent a night without sleep.

Two Popes have a date in the liturgical calendar. The Juan XXIII will be October 11 – day that began the Second Vatican Council in 1959 – while the feast of Juan Pablo II will be October 22, date when began his pontificate.

AP Convention could open debate to be politician party