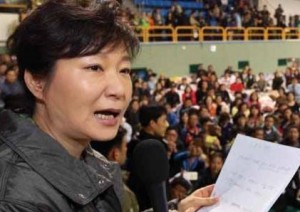 The South Korean president, Park Geun-hye, said today, Monday 21, that the actions of the captain and the crew are ‘equivalent to murder.’ This regarding the sinking of a ferry last week in South Korean waters.

During a meeting with her advisers, Park said that the captain and crew, who abandoned the sinking ship with over 300 passengers dead or missing Wednesday morning, acted in an ‘incomprehensible  manner from the point of view of common sense.’

The president also has indirectly referred to evacuation orders from the center of maritime traffic control, to which the Sewon replied saying it was not possible as the vessel’s communication systems were not working.

Park said  that it seems Lee Jun-seok, the captain, had hesitated to evacuate the passengers, and then ‘had abandoned them.’ ‘[The government] will force those responsible to response back regardless their rank,’ added Park.

Four other crew members, have been arrested by the police today, aside from Lee and the two crew members who were on the bridge of the ship at the time of the accident.