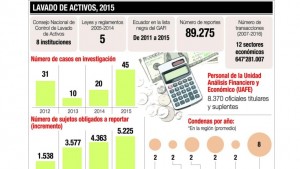 A nearly impossible mission. That applies to contain the crimes of money laundering in Ecuador, according to opposition lawmakers, who were present at the first debate on the Prevention of the money laundering crime bill.

“It is incorrect. In 2015 there were 47 reports of unusual operations, out of thousands that are being treated. No one believes them. Of these, only 20 are being prosecuted. Something is not working,” said independent legislator and member of the Commission of the Economic System, Ramiro Aguilar.

The proposal has 17 sections and three transitory provisions. ¿the main points? It applies to all susceptible economic activities to money laundering. It includes the popular and solidarity economy sector.(I)

In Guayaquil there was a rally against labor reforms