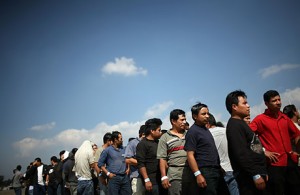 The financial crisis of the world has slowed the immigration in several areas of the globe due to the weak economies in their respective countries, informed the Report on Migration in the World 2010, which was released by the International Organization for Migration (IOM).

While Spain is the destination land for Latin Americans in Europe, however few Hispanics seized the economic incentives that the country approved with a bill for returning unemployed immigrants. So far only 5,391 people has chosen to participate on the program. A 90% of participants were from Ecuador.

The objective of Spain is to protect their labor market from foreign workers; Japan has also implemented a program to pay $ 3,000 to unemployed immigrants that have Japanese descendants that live in Latin America, mainly in Brazil and Peru. The program had some favorable results.

Meanwhile Ecuador started a program called “Welcome home” with programs of reintegration for Ecuadorian immigrants who wish to return. However the return of the immigrants it’s not easy, informed the media coordinator of IOM, Niurka Pinero, since it can be very expensive.

Mercosur Creates a Magazine to Promote Friendship Between Children